Home Medical News Researchers Discover a New Type of Biological “Switch” That Could Have Important... 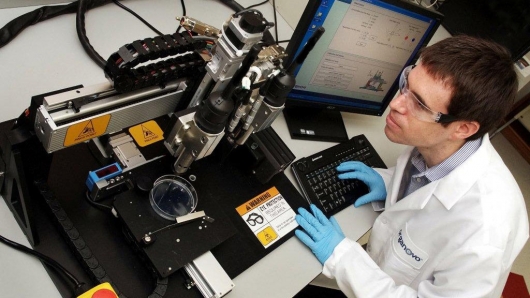 New research has found a previously undiscovered type of “cellular switch” that can be triggered by pH levels.

While this mechanism was revealed in lab tests conducted with bacteria, biological “switches” are not new. In fact, any change in heat, light, or other conditions or stimuli that will cause a predictable change in the state of an organism’s cells can be considered a biological switch. The discovery of unique cellular switches triggered by pH levels may have far-reaching implications in many different fields, including medicine and energy.

Isothermal calorimetry is a testing method by which the internal energy of protein molecules can be evaluated as a function of pH level. Observing a protein’s proton binding ability over time throughout the process of acid-denaturation gives researchers crucial insight into how protein structures are affected by pH level. The results can clearly demonstrate how a protein’s binding affinity changes with its pH level.

Isothermal calorimetry can be paired with other testing and screening methods. Perhaps most notably, researchers at the Chinese Academy of Sciences (CAS) recently paired isothermal calorimetry with other methods to describe a biological switch stemming from the interaction between cohesin and dockerin on the bacterium Clostridium acetobutylicum.

While it is true that most biological functions demand a particular pH in order to occur correctly and completely, pH changes can have their benefits, as well. Such a benefit was highlighted in research at CAS. Researchers studying the cellulosome complex of Clostridium acetobutylicum—multiple surface enzymes located on the cell’s surface—identified a never-before-seen interaction involving the protein molecules cohesin and dockerin.

Previously, most known pH-triggered switches were on-off switches, resulting in a particular protein function either occurring or not occurring. This mechanism is used to develop biomolecule sensors for biotech applications that rely on the surrounding pH to activate.

Clostridium acetobutylicum takes the concept of a switch one step further, by causing the dockerin molecule’s cohesin binding sites to switch from one functional site to another on the molecule’s surface. While molecular switches are not a new concept, Clostridium acetobutylicum remains the only organism that displays such a switch. The binding affinity of the molecules changed along with the pH reveal the true complexity of such switches.

Biological Switches and the Future of Energy

The newly emerging biological switch discoveries may significantly impact how researchers employ switches within many areas of biotechnology. In fact, biological switches (and the discovery of new ones) have enormous potential implications for the future of biotech, biofuels in particular. Continuing research regarding the characteristics of these switches is critical to enhancing the availability of biofuel.

Switches activated by pH level could greatly expand engineering and production possibilities for biofuels and related industries. Furthermore, researchers hope to boost the efficiency of biofuel production with more information about the cellulosomes of Clostridium acetobutylicum and other bacteria, particularly their structure and function. In the future, more efficient production could lead to a more sustainable and economical fuel for all.