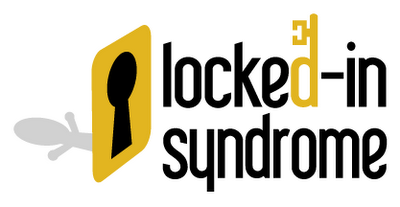 In 1995, Jean-Dominique Bauby was the editor-in-chief of French Elle, the father of two young childen, a 44-year-old man known and loved for his wit, his style, and his impassioned approach to life. By the end of the year he was the victim of a rare kind of stroke to the brainstem, the locked-in syndrome  After 20 days in a coma, Bauby woke up with a body which had all but stopped working; only his left eye functioned, allowing him to see and, by blinking it, to make clear that his mind was not impaired. Almost miraculously, he was soon able to express himself; dictating a word at a time, blinking to select each letter as the alphabet was recited to him slowly, over and over again. In the same way, he was able eventually to compose an extraordinary book, ‘The Diving Bell and The Butterfly’; A memoir of life in death  dictated using only his left eyelid.

The patients are fully awake ,alert and are aware not only their abnormal situation but also, and to a full extent, of  their surroundings.

The cortex and cranial nerves I-III are spared. Mental status is entirely preserved. Can be distinguished from coma in careful examination utilizing eye movements to demonstrate responses to stimuli.

During the initial phase, consciousness gets impaired. It usually improves within hours, or at the maximum within a few days. Prolonged impairment is very rare. Dominant feature is spastic tetraplegia with a bilateral extensor Babinski sign. There is failure of swallowing and phonation. The person is mute. Destruction of nuclei of Abducent nerve impairs both voluntary and reflex eye movements. Corneal reflex is interrupted due to destruction of parts of Trigeminal nerves. Sensory system is intact. Respiration may get impaired during intial phase. Cognitive capacities are fully intact. Only the vertical eye movement is possible.

The treatment needs to be arranged according to the event causing the syndrome. Incase of thrombosis of basilar artery; thrombolysis or complete heparanisation are specific treatment modalities. As in all tetraplegic patients, tracheostomy and percutaneous endoscopic gastroscopy need to be performed in order to allow best possible management of respiration, nutrition and prevention of aspiration pneumonia.

“Whereupon a strange euphoria came over me. Not only was I exiled, paralyzed, mute, half deaf, deprived of all pleasures, and reduced to the existence of a jellyfish, but I was also horrible to behold. There comes a time when the heaping up of calamities brings on uncontrollable nervous laughter – when, after a final blow from fate, we decide to treat it all as a joke.” ― Jean-Dominique Bauby

The Most Authoritative Drug For Alzheimer’s Disease

Top 5 things to increase the chances for pregnancy