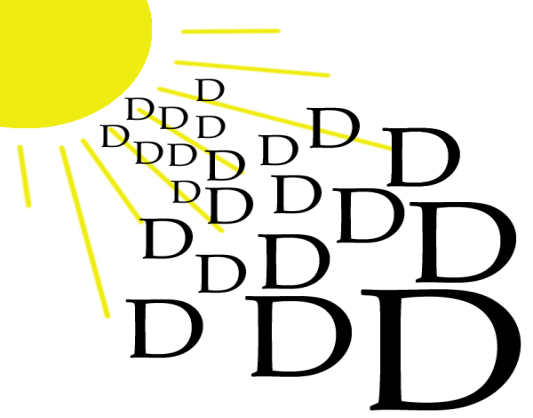 Situated in southern Asia, Pakistan has an area of 803,940 sq km (310,403 sq mi), extending 1,875 km (1,165 mi) NE – SW from the ranges of the Hindu Kush and the Himalaya to the Arabian Sea and 1,006 km (625 mi) SE – NW. It lies near equator and receives “ample” supply of SUNLIGHT. Yet… it is remorseful and startling to see so much of Vitamin D (sunshine vitamin) deficiency in a country with abundant sunshine where one would assume it to be “non-existent”.

Vitamin D3 (1, 25-dihydroxyvitamin D) being the active type of Vitamins D is the chief requirement of human body. So generally when the term Vitamin D deficiency is used, it usually means Vitamin D3 deficiency.

Vitamin D3 helps the body take up calcium and works to manage the immune system. A lack of sufficient vitamin D3 can leave body more susceptible to diseases like:

Abnormal mental conditions may arise from a lack of vitamin D3, as well. Those with insufficient levels of vitamin D3 may suffer from mood swings, depression and even Alzheimer’s disease.

Vitamin D3 is actually a hormone that is produced naturally within animals when the skin’s surface is exposed to sunlight. Indeed, the human body produces vitamin D3, but most people do not synthesize healthy levels of the nutrient.

Vitamin D3 cannot be produced by exposure to fake ultra violet (UV) light, such as that found in tanning beds. Natural, nourishing sunlight is the only source of vitamin D3 synthesis in the human body. Morning sun is the safest for the body. Head outside for at least 20 minutes each day and expose a minimum of 40 percent of body to the sun for maximum D3 synthesis. During cold months, pill or liquid supplements may be necessary for many adults.

Because of the preoccupation with the harmful effects of too much sun, most people do not get enough of it. Increased pigmentation due to which more prolonged exposure to sun is required, use of sun block, purdah observation and possibly the reason that women in general do not go outside the home may be responsible for Vitamin D Deficiency.

In the same way, foods rich in vitamin D3, including egg yolks, sardines, fortified whole milk, mackerel and beef liver are ostracized or dispirited by popular diet plans. As a result of the unwillingness of consumers, supplementing vitamin D3 is suggested for many adults; on the other hand, it is injudicious to rush to the vitamin shelf in the drug store and clutch the first bottle marked “D.” A generic vitamin D tablet is likely to contain high levels of vitamin D2. While D2 is healthy in small amounts, large quantities of the vitamin can be toxic to the body. In contrast, there is no high risk of toxicity with vitamin D3. Foods are uncommonly enriched with vitamin D3, but it can be found on sale in pill or liquid form.

SUN EXPOSURE TO THE SKIN, “MOST EFFECTUAL” AND “MOST DERELICTED” SOURCE OF VITAMIN D:

Sunshine being a free product has no campaigner or lobbyist. The Sunshine Vitamin Alliance should be established as a league of right-minded physicians, individuals and organizations who can act as promoters of natural vitamin D production through regular, non-burning sun exposure.

VITAMIN D AND THE SUN:

Sunbeams are the best natural source of vitamin D. When we get our ‘D’ from sunshine, our body takes what it desires, and de-metabolizes any extra. This is grave as vitamin D experts and many health groups now advocate 1,000 to 2,000 IU of vitamin D daily ; five to ten times more than old recommendations. Because too much ‘D’ from dietary supplements may cause the body to over-process calcium, nobody really knows for sure how much supplementary vitamin D is safe. On the other hand, sunlight-induced vitamin D doesn’t have that problem; it is the way our body is planned to make it!

* Sun exposure to the arms and legs for 10-15 minutes. The amount of vitamin D produced depends on the intensity of the UVB in the sun and many other factors. Darker-skinned individuals may need 5-10 times more exposure than a fair-skinned person to make the same amount of vitamin D. In northern climates sunlight is too weak in parts of the year to make any vitamin D – a period referred to as ‘Vitamin D Winter’.

** Vitamin D is supplemented into milk. It doesn’t occur naturally in milk.

Only a few foods contain vitamin D naturally. Vitamin D3 exists naturally in animal products, and the richest sources are fish liver oils. It is found in only small and highly variable amounts in butter, cream, egg yolk, and liver. Human milk and unfortified cow’s milk tend to be poor sources of vitamin D3, providing only 0.4 to 1 mcg/L. However, nowadays approximately 80% of all fluid milk sold is fortified with vitamin D2 (usually 10 mcg [400 IUI/ qt]), as is most dried whole milk, evaporated milk, Vitamin D is very stable and does not depreciate when foods are heated or stored for long periods some margarines, butters, soy milks, certain cereals, and all infant formula products.

Most adults, especially in sunny regions, need not make special efforts to obtain vitamin D from food. People who are not outdoors much or who live in northern or predominantly cloudy or smoggy areas are advised to drink at least 2 cups of vitamin D-fortified milk a day. The fortification of milk with vitamin D is the best guarantee that people will meet their needs and underscores the importance of milk in a well-balanced diet. Without adequate sunshine, fortification, or supplementation, a vegan diet cannot meet vitamin D needs. Vegetarians who do not include milk in their diets may use vitamin D-fortified soy milk and cereals. Importantly, feeding infants and young children non-fortified “health beverages” instead of milk or infant formula can create severe nutrient deficiencies, including rickets.

TREATMENT BEING PRACTICED FOR VITAMIN D DEFICIENCY IN PAKISTAN:

Treatment for vitamin D deficiency involves getting more vitamin D – through diet, supplements, and/or through spending more time in the sun. Although there is no consensus on vitamin D levels required for optimal health – and it likely differs depending on age and health conditions — a concentration of less than 20 nanograms per milliliter is generally considered inadequate, requiring treatment.

Guidelines from the Institute of Medicine call for increasing the recommended dietary allowance (RDA) of vitamin D to 600 international units (IU) for everyone aged 1-70, and raising it to 800 IU for adults older than 70 to optimize bone health.

In Pakistan endocrinologists and bone health concerns suggest above mentioned things to the patients deficient of vitamin D and if such things does not help then, Vitamin D oral doses like “In drop D” or Vitamin D shots (Calcitriol Injections) are given to the patients.

For deficiency, 2.5 milligrams of vitamin D has been taken by mouth every three months as prophylaxis during infancy.

There has been substantial progression of our perspective of vitamin D metabolism and its organic commotion over the last decade. The detection that most tissues and cells in the body have vitamin D receptors and that several acquire the enzymatic machinery to change the primary circulating form of vitamin D to its active form, 1,25-dihydroxyvitamin D, has provided new insights into the function of this vitamin. Aside from calcium homeostasis vitamin D has been demonstrated to exert a wider range of biological activities including regulation of cellular differentiation and proliferation, immune functions, reproduction, and of special significance is to note its role in reducing the risk of many chronic illnesses,    including    common    cancers,   autoimmune diseases, infectious diseases, and cardiovascular disease.

RECOMMENDATIONS: As, Vitamin D deficiency is wide spread in South Asian especially in Pakistani population and is contributing to burden of disease in this region. It is suggested that the government should put into practice a mandatory vitamin D supplementation program of selected foodstuff, at least during the winter months. Vitamin D supplement and an annual intramuscular injection of a large single dose of vitamin D need to be considered for the special risk groups. The program needs to be reinforced through a mass awareness campaign over the electronic media of the importance of absorbing direct sunlight for at least 30 minutes a day. The adequate vitamin D daily intake for Pakistani population also needs to be set at least twice of that is recommended intakes for Western populations.

Everything You Need to Know About Hemp

What To Do About Chronic Shoulder Pain? [Infographic]