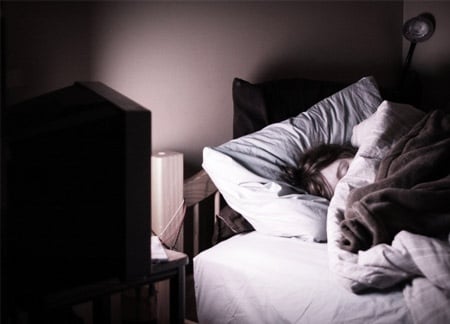 According to researches, scientists have proved time and then that bedrooms should only be used for two activities namely sex and sleep.
But when you glance over at the third world nations, many households have their most daily activities organized in their bedrooms. Only because they have fewer rooms then their developed nation’s counterparts.

Depression and insomnia are the leading causes of psychiatric consults in developing nations and the major cause can be the time spent in their bedrooms doing non-sleeping activities for example watching TV till late night.

It is not only restricted to adults but children are also afflicted with it. In a study published in Journal of American Academy of Pediatrics, the researchers Barbara A. Dennison, Tara A. Erb, & Paul L. Jenkins found television viewing and television in bedrooms is associated with overweight risk among low-income preschool children.

In an other study of 80 children in Buffalo, NY, USA ages 4 to 7, the presence of a television in the bedroom showed increased average viewing time by nearly nine hours a week, to 30 hours from 21. And parents of those children were more likely to underestimate their child’s viewing time.

“If it’s in the bedroom, the parents don’t even really know what the kids are watching,” said Leonard H. Epstein, professor of pediatrics and social and preventive medicine at the School of Medicine and Biomedical Science at the State University of New York at Buffalo. “Oftentimes, parents who have a TV in the kids’ bedrooms have TVs in their bedrooms.”

Many psychiatrists when consulted ask their patients who complain of insomnia that bedrooms should only be used for sleeping or having sex.
Humans have very adaptive behaviour when we are exposed to any activity repeatedly we become habituated i.e. in this case watching TV while in your bed is more likely to make you habituated not to sleep when you want to; over time.

What Type Of COVID-19 Test Should You Get And When