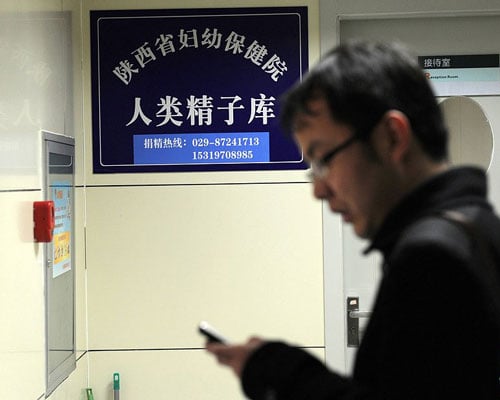 Facebook
Twitter
WhatsApp
Print
Copy URL
Infertility is taking a shape of epidemic in China, and cultural and legal issues are making sperm banks face a critical shortage of sperms. Infertility is a growing problem in China. In southern Guangdong province, 14 percent of the population, which numbered 104 million in 2010, cannot conceive — and the fact that the province has only one sperm bank doesn’t help. Couples generally have to wait at least a year to have their names called. The sperm shortage has even prompted a desperate plea from a government official, according to one Chinese-language news site, asking college students to donate.  ”Donating your sperm is healthy,” said Luo Wenzhi, the head of Guangdong’s family planning commission, in an interview. “It won’t hurt you nor kill you.”

The Ministry of Health began allowing sperm banks to open in 2001, setting a maximum limit of one per province or autonomous region. Today, 10 operate nationwide, all of them State-run.

Getting men to donate sperm has proved a challenge in China. Sperm is associated with vitality, and giving it away is considered a cultural & religious taboo.

Wang Jian, a student admitted to China Daily that he has not told his parents or girlfriend about his donation because he feels they “will kill me for letting a stranger use the precious family seed”. “I’ll just be glad if I can help a childless couple,” said the student at China University of Mining and Technology. “Actually, I should thank them for continuing my family line.”

Another reason for the shortage has to do with a Chinese law that requires a single sperm donation sample to be shared among a maximum of five women; in most western countries a sample is often shared among 10 women.

The law was drafted from the fear that two people born of the same sperm might end up married to each other, according to the the China Daily – although in a country with 1.3 billion people, experts say the chances of that are pretty remote.