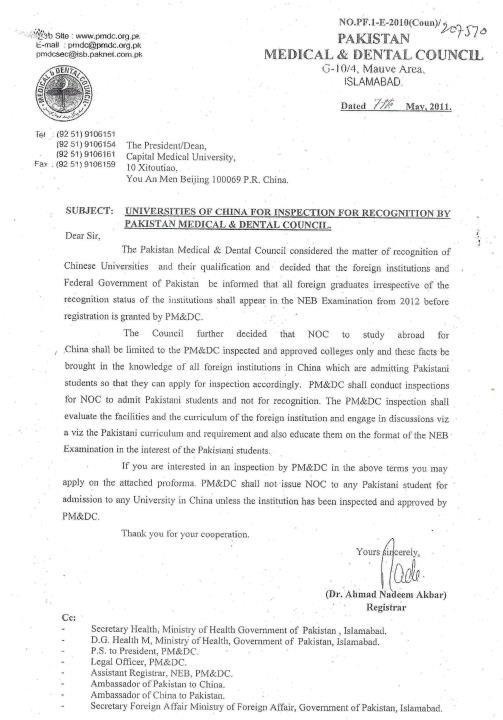 All Pakistani graduates current and future from China will have to take NEB regardless of their Universities’ Recognition for getting RMPs starting this fiscal year i.e. 2012.

According to sources, Supreme Court of Pakistan had earlier ordered Ministry o Health and Pakistan Medical & Dental Council (PM&DC) to stop recognizing foreign institutes. Following the Supreme Court of Pakistan’s orders PMDC stopped recognizing institutions and notified the currently recognized that their students will have to take NEB starting July 2012 and onwards.

Many institutions still advertise themselves as “PMDC recognized” and are fetching students by misrepresenting their current status with the Council.

A pre-med student while talking to Medicalopedia told, “Many official agents of foreign medical universities proclaim themselves as PMDC recognized.”

“PMDC should enforce law enforcement agencies to take actions against such institutions and put a list of institutions whose degrees are valid in Pakistan.”, the student further added. While talking to PMDC officials, it was confirmed that from this year all students who have not applied for RMP yet will have to give exam from this year onwards.