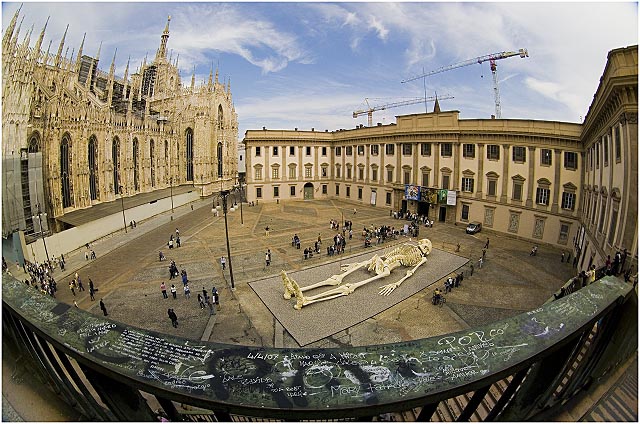 ‘Calamita Cosmica’ (Cosmic Magnet in English) is a 28 meter long sculpture of a human skeleton created by Italian artist Gino De Dominicis and is currently on display at the Museo Nazionale della Arti del XXI Secolo – MAXXI museum of contemporary art in Rome, Italy. It is a perfect scaled model of the human skeleton, except for the strange long nose.

Before Calamita Cosmica settled at the MAXXI, it toured Europe for a number of years visiting places such as Versailles, Naples, and Milan. The Giant was first unveiled in 1990 at Centre National d’Art Contemporain in Grenoble, France. Thereafter in 1996 it moved to the courtyard of the Palace of Capodimonte, Naples. In 2005 it was at display at Mole Vanvitelliana, Ancona, Italy – the home town of the artist. In early 2007 it moved to Palazzo Reale at Milan and after few months it landed in Versailles at ‘Parterre d’Eau’, in front of the facade of the Versailles Chateau. Thereafter in 2008 it was at display at Musée des Arts Contemporains, Hornu, Belgium. After the display in Belgium it was moved to Rome, where it currently resides. Tumors of The Pineal Gland