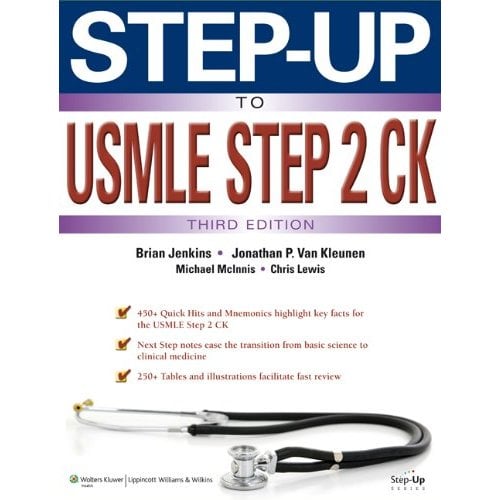 Jonathan P. Van Kleunen MD wrote Step-Up to Step 2 CK back in mid 2000’s to help medical students learn more efficiently on how to attempt USMLE Step 2 CK. But to this date it is still debated among medical students that there is no single handbook to rely on for USMLE Step 2 CK unlike USMLE Step 1 where we had First Aid for USMLE Step 1.
Later in 2010, Conrad Fischer – the renowned Kaplan instructor wrote all-in-one book for USMLE Step 2 CK named Master The Boards Step 2 CK, which was highly appreciated but also criticized “for not being complete” and its “lack of information”.
This time, DoctorsInTraining.com‘s instructors Dr. Brian Jenkins, Michael Mcinnis and Chris Lewis have paired up with Jonathan P. Van Kleunen MD to update the book Step Up for Step 2 CK to include topics which other books have missed and to make it better than others. It is worth mentioning here that it is  the same book which is used by DoctorsInTraining.com’s courses for USMLE Step 2 CK.
The book is going to be released later today, lets see what it has got which others lacked and does it live up to its hopes!!!
Buy it here: http://www.amazon.com/Step-Up-USMLE-Step-CK-Series/dp/1451189591/
Coin down your views about this book and Pros/Cons of it.

State board sponsorship for USMLE Step 3 to be discontinued starting...