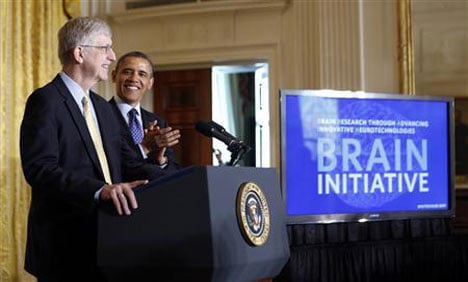 President Barack Obama on Tuesday proposed an effort to map the brain’s activity in unprecedented detail, as a step toward finding better ways to treat neurological diseases.

The Brain Research through Advancing Innovative Neurotechnologies initiative, or BRAIN, will begin with a $100 million investment in Obama’s 2014 budget. The idea, which Obama first proposed in his State of the Union address, would require the development of new technology that can record the electrical activity of individual cells and complex neural circuits in the brain “at the speed of thought,” the White House said.

The White House is hopeful that BRAIN will result in the development of neural imaging technologies that will give scientists a new look at how different sections of the human brain interact in real-time, potentially paving the pay for treatments for debilitating disorders such as Alzheimer’s and epilepsy.

White House press release on the BRAIN initiative said, “These technologies will open new doors to explore how the brain records, processes, uses, stores, and retrieves vast quantities of information, and shed light on the complex links between brain function and behavior.”

The National Institutes of Health, the Defense Advanced Research Projects Agency, and the National Science Foundation are taking part jointly in this research program together with some top academic leaders, including Dr. Cornelia Bargmann of The Rockefeller University and Dr. William Newsome of Stanford University, will guide the program.