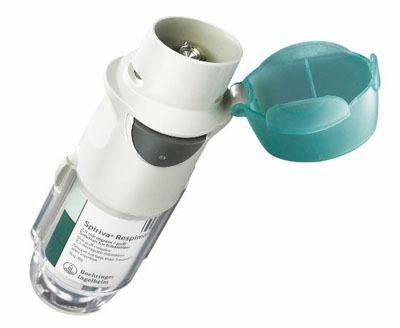 COPD is a progressive disorder of irreversible airway obstruction. Various drug therapies have been discovered to slow the progression of the disease and improve the symptoms. Tiotropium is one of the drugs used to treat COPD. It is an anti cholinergic which means it blocks muscarinic receptors on smooth muscle surrounding the airways. This results in relaxation of muscles and opening of airway.

Initially Tiotropium dry powder inhalers were introduced in market. But these inhalers are not effective in acute exacerbation of COPD as patients had difficulty to take deep breath in and coordinate the inspiration. To solve this problem soft mist inhalers were introduced. They had advantage that they were easy to use and dose delivery was not dependant on respiratory effort.

But recently a retrospective cohort study by Dutch investigators showed that soft mist inhalers are causing more mortality than dry powder inhalers. This research is done on patients. Patients on soft mist inhaler showed 30% increase in mortality as compare to dry powder inhalers. Most of the deaths were caused by cardiovascular disease or cerebero-vascular accident.

It is not clear what the cause of increased mortality is. One suggestion is that it is probably related to increased delivery of drug in systemic circulation. However there is no concrete evidence to prove this theory. It is advised that caution should be made while prescribing mist to patients suffering from COPD with coexistent heart problems.

How to Tell the Difference Between Picky Eating and ARFID

What Kind of Cases do Personal Injury Lawyers Handle?