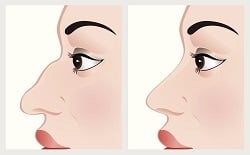 Rhinoplasty, or nose surgery, is one of the most commonly performed plastic surgery procedures today. The surgical technique is often carried out to address a concern with the appearance of the nasal structure. Patients may feel self-conscious about the length, width, shape, or other aspect of the nasal appearance.  Another source of distress associated with the nose is function. Breathing problems can occur because of a defect from birth or as a result of injury. Rhinoplasty can also be used to improve a patient’s ability to breathe through the nose, which may be referred to as functional rhinoplasty.

An airway obstruction that has led to breathing problems may manifest through several symptoms, including nasal congestion, the tendency to breathe through the mouth, reduced sense of smell, or dry mouth. Nosebleeds, headaches related to sinus pressure, and recurrent sinus infections can also be the result of an airway obstruction.

Since a well-trained rhinoplasty surgeon will always take into consideration both the nasal aesthetic and function while performing the procedure, generally speaking cosmetic nasal surgery and functional rhinoplasty are similar in many ways. In fact, a breathing issue is often either the cause or result of a misshapen nose, making it a top priority to find a surgeon who specializes in rhinoplasty. The surgery may affect the shape of the nose for the better, while also fixing functional problems.

Treatment performed on the internal nasal passages does not necessarily alter the outside appearance of the nose. These may include a septoplasty to straighten a deviate septum, surgery to reduce enlarged turbinates, or nasal polyp removal. Patients with more severe nasal airway obstruction that causes the nose to become twisted, pinched, collapsed, or deviates the external framework will need to be surgically treated to straighten or enlarge the airway.

When straightening a deviated septum, which is the wall of cartilage separating the left and right nostril, one or more techniques may be used to align the septum to open up the blocked nasal passage. During a turbinate reduction, some tissue or portions of bone that run the length of the internal nasal cavity may need to be removed. A nasal polyp is a benign growth that can also obstruct breathing, and they often carry risk of recurrence, even after removal. If the patient has a collapsed nasal valve, which is one of the most common causes of external airway obstruction, techniques to correct the problem will need to be chosen in a case-by-case basis as each patient’s nasal anatomy is evaluated.

The type of anesthesia used, either general or local with sedation, is determined based on the complexity of the rhinoplasty procedure. In most situations, rhinoplasty is performed on an outpatient basis, allowing the patient to return home to recover.

The incisions made during rhinoplasty are either placed inside the nostrils (closed rhinoplasty), or on the thin strip of skin between the nostrils (open rhinoplasty). The skin is separated from the underlying cartilage and bone, allowing the surgeon to reshape the structure of the nose and fix any obstructions prior to re-draping and suturing the skin.

Cosmetic rhinoplasty is not covered by health insurance, but surgery for the purposes of correcting a functional problem typically is. Since rhinoplasty is often performed to address both form and function of the nose, the patient will be responsible for portions of the surgery attributed to cosmetic improvement. The best way to determine if your insurance plan will cover any part of the procedure is to contact your provider. This will give you a better idea of how much you will need to pay out of pocket. How to Calculate the Number of Calories Burned By Cycling?

What Are The Beauty Benefits Of Using Biotin?