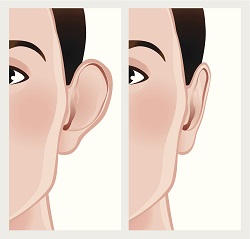 Prominent ears can be more than a mere aesthetic distaste. For children, the problem can run deeper. As much as we would like the younger generation to display compassion towards all their peers, the reality is not always ideal. As children do, teasing and name calling can ensue. The result is lowered self-esteem and confidence for the child that is already unhappy with their appearance.

Otoplasty, also often called ear surgery or ear pinning, corrects the appearance of large or protruding ears. Large ears are reduced in size by reshaping the cartilage and protruding ears are set back closer to the head. The procedure can be performed on patients as young as five years old once the ears are close to being fully grown. Some surgeons claim the age of 4 is also appropriate. By 1 year old the ears have reached approximately 80% of their adult size. Between 5 and 6 years old they are their final size and very little change occurs after the age of 10. Most otoplasty surgeries involve individuals younger than 14 for emotional reasons and because the ear cartilage is more pliable in children, allowing for easier shaping. When it comes to this particular plastic surgery technique, the motto “the earlier the better” usually holds true. With age, cartilage becomes less resilient and more difficult to manipulate.

Deciding If a Child is a Good Candidate for Otoplasty

Although ear surgery offers multiple benefits when performed at a young age, otoplasty is not ideal for every small child. Patients must be in good health and be able to cooperate during the pre- and post-op process.

Young patients may not understand all the details of the procedure, and even a simple check-up can be frightening for some kids. Parents should maintain a positive attitude and have their child’s best interest at heart when deciding to meet with a plastic surgeon. While they may not recognize a problem with their ears, feelings of self-consciousness can develop over time as the child becomes older and more aware.  Parents must decide whether to address the concern early on, before it is even an issue, or to wait until the child can verbalize their own feelings about the matter. There is not a right or wrong answer, but rather the decision should be based on what is right for each unique family.

The Procedure and Recovery

Between two and three hours is typically needed to perform the outpatient surgery. Adults and older children may receive local anesthesia and sedation, while general anesthesia is usually preferred for younger children. Small incisions are made behind the ears through which the cartilage is molded to create better balance between the ears and the rest of the face and head. Usually, both ears receive treatment, although in some cases only one may need correction in order to create optimal symmetry.

After surgery, patients may feel some mild discomfort. This can be in the form of aching or throbbing, which will fade after a few days and is manageable with medication. Temporary numbness around the surgical site is another side effect, along with some redness and swelling. The head will be wrapped by a bandage used to support the ears and mold them as they heal. The bandage is removed after a few days and replaced by a lighter dressing worn 24/7 for a period of time designated by the surgeon. After some time the dressing will then only be needed at night.

Children will be able to return to school 5 to 7 days after surgery. Strenuous activities, such as sports, will need to be postponed for 1 to 2 months to prevent trauma to the newly shaped ears. The results of otoplasty are usually permanent and will not require further treatment. How CBT Improves the Functioning and Quality of Life