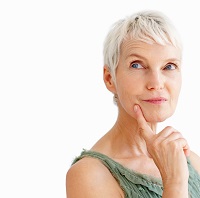 When many people think of a facelift, they are thinking of a traditional facelift, which is the most invasive type of the procedure. There are actually several types of facelifts, some more invasive than others, all of which can produce a more youthful appearance.

Traditional Facelift
The traditional facelift, also known as a rhytidectomy, is considered the gold standard in facial rejuvenation and it is performed under general anesthesia. A facelift takes up to six hours to complete and the recovery time is around two weeks, but swelling and bruising may occur for up to four weeks.

The traditional facelift is the most invasive option with more incisions, but it also produces the most noticeable and long-lasting results. A rhytidectomy can address sagging in the midface, deep creases along the nose and lower eyelids, fatty tissue that is displaced, lost muscle tone that creates jowls, as well as excess fat and loose skin under the jaw and chin. Rhytidectomy is often performed alongside a brow lift to correct a furrowed or sagging brow and eyelid surgery.

30 Minute Facelift, or Acculift
The Acculift procedure is not a substitute for a traditional facelift, but it is minimally invasive with a very short recovery time and noticeable yet subtle results. This procedure is the first laser-assisted facial contouring procedure in the country and it targets lower facial aging, particularly jowling. The Acculift is performed as an outpatient procedure under local anesthesia with just a few needle punctures, through which a laser fiber is inserted. The energy from the laser targets fatty tissue along the jaw and neck, breaking it up into a partially liquid state. This fat is then removed through a minor liposuction.

This non surgical facelift sculpts and smooths the lower face for a more youthful appearance and tighter jawline.

Mini-Facelift
A mini-facelift is less invasive than a facelift but more invasive than a non surgical facelift. The mini-facelift is designed to give long-lasting results without major surgery or a long recovery time. This procedure takes about an hour and it is designed for patients with minimal neck laxity, especially younger patients or those who have had a facelift before.

A mini-facelift goes by many names, including a lifestyle lift or an S-lift. It is a more limited technique to lift the face using smaller incisions and less skin removal. It improves the same areas as a facelift but to a lesser degree and for a shorter amount of time.

Midface Lift
Also known as a cheek lift, this procedure differs from a traditional facelift and a mini-facelift in that it addresses aging around the cheekbones exclusively. A midface lift uses minimal incisions to lift drooping cheek tissue for a more youthful appearance. Because this procedure is often used for patients with early signs of aging and lost fullness in the upper cheeks, it is often combined with fat grafting to the cheeks to improve the signs of early aging.

What Happens to a Woman’s Body When You Don’t Drink Enough...

Laser Hair Removal: Is it Really Worth Your Investment?