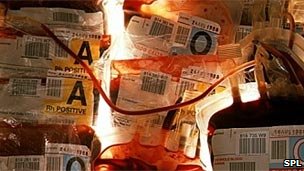 “O” is the most common blood group in the UK
A woman’s ability to conceive in early middle age may be influenced by her blood type, according to research.

The US study of 560 women undergoing fertility treatment found that those with type “O” blood had chemical signs linked to low egg numbers.
There is no clear explanation for the results, presented to the American Society of Reproductive Medicine conference in Denver.
Approximately 44% of the UK population has type “O” blood.

The researchers, from Albert Einstein College of Medicine in New York, and Yale University, looked at the levels of a chemical called follicle-stimulating hormone (FSH) in the women, who had an average age of 35.

Blood clue A woman has a fixed number of eggs, her “ovarian reserve”, which are released gradually over her fertile life.
High levels of FSH are thought to be an indicator that this reserve is diminishing more quickly – which can reduce chances of conception once a woman reaches her 30s and 40s.

A woman’s age remains the most important factor in determining her success of conceiving, said Dr Edward Nejat Lead researcher

Analysis of blood samples revealed that the women with type “O” blood were more likely to have higher FSH readings.

Those with type “A” blood – the other major blood group in the UK – had lower FSH levels.

5 Ways to Get Your Sleep While Traveling