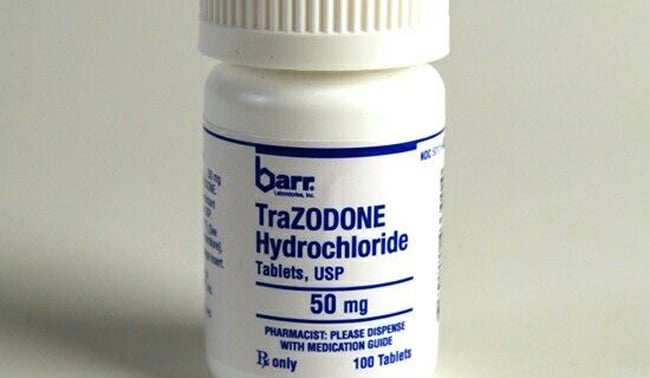 Sleep plays a crucial part in a person’s physical and mental health. Lacking the proper amount of sleep can increase the risks of heart disease, kidney disease, diabetes, stroke, and high blood pressure. For some people, falling asleep at night is as simple as lying in bed and closing their eyes. Other people may struggle a bit more as they toss and turn throughout the night, unable to easily fall asleep. In cases of insomnia, people may take sleep aids to help them fall asleep. One sleep aid that is commonly prescribed by doctors is trazodone.

Trazodone, approved by The Food and Drug Administration (FDA), has been frequently used to help people who suffer from insomnia. While the drug is viewed as having a low potential for being misused, it  can still be problematic to those who take it for a long period of time. As a person’s body becomes accustomed to trazodone, it requires higher doses of the drug to produce the same level of relaxation that was experienced when trazodone was first taken. Maintaining the same high can develop into a pattern, further affecting the person’s tolerance level and possibly leading to an addiction forming.

For people who are having a hard time sleeping and don’t want to rely on a medication like trazodone, there are healthier alternatives for improving their ability to sleep. These natural sleep aids can allow a person to have a comfortable night’s rest and improve a person’s overall health.

While this natural sleep aid is already produced in a person’s pineal gland, melatonin is a natural hormone that relaxes the human body. The pineal gland is a pea-sized gland that is located above the brain. The gland stays inactive throughout the day until the sun goes down and the gland becomes active. At night, melatonin is produced and released into the bloodstream which calms the body enough to where it can fall asleep.

Melatonin can be helpful for those who are not producing enough of the hormone on their own. A typical dose of melatonin (1 to 3 mg) can elevate the melatonin levels in the bloodstream and provide numerous health benefits in addition to improving a person’s ability to sleep. Melatonin can:

Since melatonin can be consumed naturally in some foods, the U.S. Dietary Supplement Health and Education Act of 1994 authorized melatonin to be sold as a dietary supplement. Therefore, synthetic melatonin pills do not have the be regulated by the FDA. Researchers believe that as people age, the amount of melatonin that is produced by the pineal gland decreases, which can explain why adults may not sleep as well as they did when they were younger.

Valerian is an herb that not only helps manage insomnia but it also calms anxiety and is found in some sleep-promoting tea blends. When valerian is consumed, the brain’s gamma-amino butyric acid level increases and causes sedation. Valerian assists a person’s chemical makeup by regulating the amount of time it takes to fall asleep.

The valerian root can take up to two weeks to work. Aside from the sedative effects, there are other positive changes a person can see within their body once they begin to use valerian such as:

A study conducted by the Foellinge Health Center in Sweden found that 89 percent of participants felt that their sleep improved after taking valerian. Another 44 percent reported that they slept perfectly. Out of all the participants, no side effects were experienced. While valerian helps people looking to regulate their sleeping patterns, it wasn’t always used as a sleep remedy. The herb was medicinally used in ancient Greece and Rome , to treat a variety of disorders like epilepsy and hyperactivity.

Just like valerian, chamomile is also an herb that has been used for centuries. Chamomile can be easily found in most supermarkets and drugstores. The herb has commonly been consumed in the form of tea that people can make themselves before they fall asleep. The tea has been found to work as a sleep aid while also having the power to enhance a person’s mood. Additionally, chamomile tea can be a very healthy beverage. Usually, the drink only contains 2 calories, 2 mg of sodium, no cholesterol and no caffeine. There are also additional uses for chamomile that can benefit one’s health. Depending on the form of the herb, it can be used to soothe toothaches, reduce the effects eczema and itching a person has or treat bug bites. The most popular way to ingest chamomile is to drink it as a tea, which can help clean out one’s liver and heal digestive tissues in the body. Chamomile can also reduce:

There are several types of chamomile for people to consume, such as German and Roman. Both herbs are similar in appearance, but German chamomile has thinner leaves and a smoother stem. German chamomile is used for more sedative purposes. One of the more popular types of the tea is Roman chamomile, a silver-white flower that smells like apples. Roman chamomile tea is frequently used to treat nausea, vomiting and heartburn.

Receiving an adequate amount of sleep is important to maintaining the healthy functions of the human body. For people who struggle with insomnia regularly, taking a drug like trazodone can seem like a reasonable solution to an aggravating problem. While prescription medications can be effective in the short term, they are easy to misuse and can spur a drug addiction. As a safer alternative, natural herbs and supplements can have positive effects on not only a person’s sleep schedule, but their overall physical and mental health.

How we can structure essay beautifully

What To Consider Legally If You’ve Been Injured In A Vehicle...